Washington (CNN)  – The Trump administration notified Congress on Tuesday that it has approved the potential sale of SM-3 anti-ballistic missiles to Japan in a deal estimated to be worth $133.3 million, according to a State Department statement.

The SM-3 Block IIA is an anti-ballistic missile that can be employed on Aegis-class destroyers or on land, via the Aegis Ashore program, according to a State Department official.

“If concluded, this proposed sale will contribute to the foreign policy and national security interests of the United States by enhancing Japan’s Maritime Self Defense Force’s … ability to defend Japan and the Western Pacific from ballistic missile threats,” the official said.

Throughout 2017, North Korea has conducted a series of ballistic missile tests despite constant criticism from the West and trade sanctions.

The most provocative moment came November 29, when North Korea said it successfully tested a new type of intercontinental ballistic missile, topped with a “super-large heavy warhead” which it said was capable of striking the US mainland. 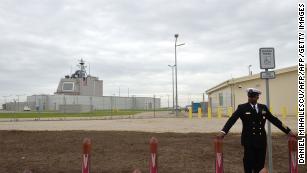 Russia accused the US of violating an arms control treaty by agreeing to supply anti-missile systems to Japan.

Russian Foreign Ministry spokeswoman Maria Zakharova said the deal with Japan was part of a bigger plan by the US for a “global anti-missile system.”

Zakharova claimed they were in breach of the Intermediate-Range Nuclear Forces Treaty, an arms control agreement between Moscow and Washington that has been in force for 30 years.

“We need to bear in mind that all these systems have universal missile launchers that can use all types of missiles. It means another violation of the INF treaty and we see that Japan is an accomplice in this matter,” she said.

The US rejected the accusation. “The United States is in full compliance with the INF Treaty. Russian claims to the contrary are false and meant to deflect attention from Russia’s own very clear violations,” a spokesman for the US State Department told CNN at the time.

Secretary of Defense James Mattis spoke with Japan Minister of Defense Itsunori Onodera on Monday to discuss a range of US-Japan alliance matters and reaffirmed US commitments to the defense of Japan — pledging to work closely with his Japanese counterpart to bolster critical alliance capabilities.  (content credit: https://www.cnn.com. by Zachary Cohen and Ryan Browne, CNN, 1/9/2018)

Also, Coaxial Components Corp. (Coaxicom), a company dedicated to the design and manufacturing of RF and Microwave components is honored to be a “spoke in the wheel” on many of today’s most revolutionary engineering achievements.

Companies and organizations from around the globe seek Coaxicom’s parts and expertise because we’ve earned the reputation for military-grade quality, speed and innovation.

To learn more about Coaxicom return to the website here. Or get an instant download of the Product Reference Sheet.