The benefits of electromagnetic energy for treating medical conditions have been recognized since the late 19th century. Today, although probably only magnetic reside­­nce imaging (MRI) is familiar to most people, many other medical applications exploit its unique abilities. They include reducing the size of tumors, aiding cardiac surgery, rejuvenating skin and treating muscular conditions. Medical systems based on RF energy are continually advancing, thanks in large measure to the transition from vacuum tubes to solid-state. Semiconductor devices such as LDMOS bring flexibility, enable advanced modes of operation and offer advantages at microwave frequencies.

The benefits of RF energy in almost all medical applications are gained from heat generated by some form of RF generator. Although the first recorded evidence of heat from any source used for medical purposes dates to prehistoric times, when heated rocks were used to reduce or stop blood flow (hemostasis), it was the prodigious inventor and scientist Nicola Tesla who first proposed, in 1891, that the application of electricity could produce heat in a human body. This was dangerous territory, as electricity caused electric shock. Shortly after Tesla’s results were presented, French physician and biophysicist Jacques Arsene d’Arsonval discovered that when the frequency of this energy was above 10 kHz, rather than shocking the patient, it caused the skin to heat. He proposed ways of applying this “high frequency” current to the body using contact electrodes, capacitive plates and inductive coils. 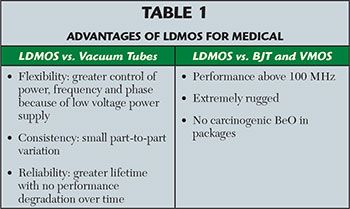 The use of RF energy to heat deep tissue was first suggested by Austrian chemist R. von Zaynek, who noted that production of heat in tissue was a function of both frequency and current density. In 1908, German physicist Karl Franz Nagelschmidt coined the name “diathermy” for this, during what were the first extensive experiments on humans. Nagelschmidt is considered to be the pioneer in the field, writing the first textbook on the subject in 1913. Important developments in later years included those of Harvey Cushing and William T. Bovie, in which an electrosurgical device developed by Bovie was used to cause homeostasis during the resection of a vascular brain tumor.

The initial use of RF energy for diathermy was impeded by the lack of devices to generate it, as spark-discharge Tesla coil machines could reach frequencies of only 2 MHz. This type of diathermy was called longwave diathermy, because of the long wavelengths at these frequencies. The invention that broke this logjam was the vacuum tube, revealed in 1904 by John Ambrose Fleming, which ultimately increased the frequency to about 300 MHz (see Figure 1). Diathermy machines operating at this frequency were called shortwave diathermy. Like many RF and microwave technologies, the advancement of vacuum tube technology dramatically accelerated during the world wars, and new types of vacuum electron devices were created. The most noteworthy was the magnetron, which made it possible for emerging radar systems to generate high power at higher frequencies. One of the beneficiaries of the magnetron has been the medical profession, and many of the initial applications are still in use today and still use magnetrons for generating RF energy.

Like vacuum tubes before them, transistors further extended the reach of RF energy medicine. The earliest examples of transistor-based power generation appeared in the 1950s, although these devices generated minimal power and were extremely fragile. As their limitations were mitigated in subsequent years, semiconductor technologies such as the bipolar junction transistor (BJT) and vertical metal oxide semiconductor (VMOS) transistor were adopted for medical devices. Today, laterally-diffused metal oxide semiconductor (LDMOS) power transistors are proving to be the preferred solid-state technology, producing power levels up to 1500 W. LDMOS transistors have advantages that make them well suited to be the alternative to their vacuum tube and transistor predecessors (see Table 1).

The primary benefit transistors have over vacuum tubes for medical applications is flexibility. The output power can be tightly controlled over their full dynamic range, which enables heat transferred to human tissues to be reduced when required. They support sweeping frequencies within an ISM band (from 902 to 928 MHz, for example), which helps to maximize the energy transferred to the body. For advanced systems that use multiple probes to combine wave fronts, the phase can be controlled to move the areas that must be targeted. While vacuum tubes require potentially dangerous high voltages, generated by large and heavy power supplies, transistors operate at 32 to 50 VDC. The biggest advantages of LDMOS transistors over previous semiconductor technologies are their ability to operate at higher frequency, such as 915 and 2450 MHz, and ruggedness. LDMOS power transistors will survive when almost all the transmitted energy is reflected back, because of an impedance mismatch such as a short or open circuit. This is important in medical applications because human tissue can present a variable load to the probe.

Originally, the capabilities of available RF power sources determined the frequencies where electromagnetic energy-based systems were used. The first operating frequencies were very low, with both frequency and output power increasing over time. However, as medical, scientific and industrial systems began to proliferate, it became necessary to specify areas of the electromagnetic spectrum for operation. These industrial, scientific and medical (ISM) bands for the U.S. are shown in Table 2, and are widely accepted throughout the world. Some countries use additional frequencies. Many other systems operate in these same bands, including Wi-Fi, Bluetooth, microwave ovens and RF-based industrial equipment. With ISM bands unregulated, equipment must prevent or tolerate interference generated by nearby applications.

With the exception of MRI— which uses an intense electromagnetic field for imaging, not heating—all medical applications use RF to create heat. The electromagnetic field applied at high frequencies forces the water dipole to move with every cycle, creating friction between the molecules and generating heat. The frequencies at which this heat is generated and the hardware used to apply the heat largely determine the utility for specific medical uses. Generalizing about the use of electromagnetic energy for medical applications:

After the early efforts by Tesla and others suggested an interaction between radiated electromagnetic energy and the human body, the mechanism was further clarified and extended to all non-conducting materials. It was shown that the depth of penetration is determined by the frequency of the radiation and the insulating properties of the material. When microwave generators became available, it was demonstrated that because of their short wavelengths, specific areas could be targeted precisely. Greater penetration at lower frequencies (to about 2 inches) makes lower frequencies desirable for applications such as diathermy, in which the goal is often to soothe aching muscles. Microwave frequencies offer benefits such as faster heat delivery, more precise targeting of specific areas (a tumor, for example) and more accurate control.

At low frequencies, the electromagnetic field is generated between two or more electrodes, the shape dictating the characteristics of the field. The most common types of electrodes are rods and plates, between which the target material is placed. With increasing electrode distance, the voltage to maintain the electric field strength also increases, and the maximum distance between the electrodes and, thus, the maximum thickness of the target material is determined. When microwave frequencies are used, the energy is launched from a small emitter and guided through space to the target; a set of plates, used with lower frequency applications, is not required.

Arguably, there are dozens of medical applications that use RF energy, either alone or in combination with light or a laser at various wavelengths. However, they generally fall into the following categories: MRI, diathermy, ablation and skin rejuvenation. MRI will not be discussed, because its benefits are not derived from heat. (for complete article, go to https://www.microwavejournal.com/articles/27505-advances-in-rf-energy-for-medical-applications).

Coaxial Components Corp. (Coaxicom) offers world-class manufacturing capabilities necessary to deliver the quality and reliability our customers demand including Military specifications MIL-PRF 39012, MIL-A 55339, MIL-C-83517, and MIL-STD-348 as applicable. Gold plated stainless steel or passivated versions of SMA connectors are standard in order to meet the finish and corrosion requirement of MIL-PRF 39012. Interface dimensions as well as all other applicable requirements are also in accordance with MIL-PRF-39012 and other military standards where the need exists.