Here’s When China’s Space Station Will Fall Back to Earth!

“We need to get used to the idea of things raining down on us from space.”

Scientists have finally determined when China’s oldest space station will crash back to our planet.

In 2016, the Chinese announced they had lost control of Tiangong-1, which was first launched in 2011, and that it would come falling to Earth sometime “in the latter half” of last year. That seems like a pretty large window, but at the time scientists noted that it could fall anywhere at anytime.

The space lab, named “heavenly palace,” is still in orbit. Earlier in March, experts put the re-entry period between March 24 and April 19, but couldn’t give a more precise estimate.

The lack of accuracy was understandable: At low orbit, below about 2,000 km above the planet’s surface, objects will eventually lose speed and fall back to Earth if they don’t continue to exert a force to propel themselves.

However, the drag from Earth’s atmosphere that acts on objects at this height is not consistent, so pinpointing exactly when the space station, which is currently orbiting at about 250 km above the planet, will begin its descent is very difficult.

Don’t worry about checking the sky during the days the space station is likely to make its re-entry, though.

“The personal probability of being hit by a piece of debris from the Tiangong-1 is actually 10 million times smaller than the yearly chance of being hit by lightning,” the ESA said.

“At no time will a precise time/location prediction from ESA be possible,” the ESA said.

It’s most likely to crash into the ocean somewhere between latitudes 43° north and 43° south, but that’s about as much as people will know before Tiangong-1 falls from orbit. 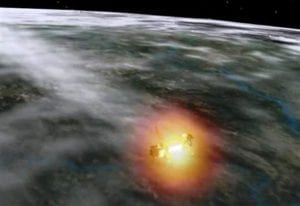 “We need to get used to the idea of things raining down on us from space,” University of Texas researcher Leon Vanstone wrote in a commentary piece for Fortune, noting that falling satellites are only going to become more common as the number of launches continues to increase.

Scientists are still searching for solutions to the problem of dealing with free-falling satellites and other space debris. Options so far include shooting them down with lasers, as China proposed earlier this year. (content credited by: GRACE DONNELLY, March 21st, 2018, https://amp.timeinc.net, Fortune Briefing)

STUART, FLORIDA – Coaxial Components Corp. (Coaxicom), a company dedicated to the design and manufacturing of RF and Microwave components is honored to be a small part of many of today’s engineering and research achievements.

Companies and organizations from around the globe seek Coaxicom’s parts and expertise because we’ve earned the reputation for military-and medical grade quality, speed and innovation.