Need a little balance in your life? Check out what a Balun can do for you!

A Balun is used to “balance” unbalanced systems – i.e. those where power flows from an unbalanced line to a balanced line (hence, balun derives from balance to unbalanced). As an example, consider a coaxial cable connected to a half-wave dipole antenna shown in Figure 1. 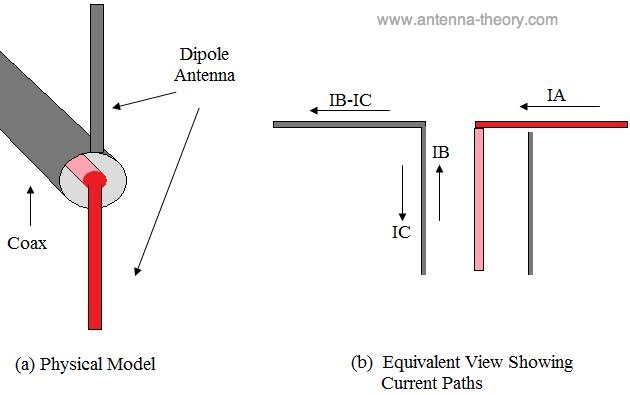 Ideally, the current IC should be zero. In that case, the current along the dipole arm connected to the outer conductor of the coax will be equal to the current on the other dipole arm – a desirable antenna characteristic. Because the dipole wants equal or balanced currents along its arms, it is the balanced section. The coaxial cable does not necesarily give this however – some of the current may travel down the outside of the outer coax, leading to unbalanced operation – this is the unbalanced section.

The solution to this problem, however you come up with it, is a balun. A balun forces an unbalanced transmission line to properly feed a balanced component. In Figure 1, this would be done by forcingIC to be zero somehow – this is often called choking the current or a current choke.

There are many baluns that have been developed to choke off the outer current and restore balanced operation. Baluns are pretty tricky to fully understand and at first pass can be difficult to grasp. However, suffice it to remember that a balun forces unbalanced lines to produce balanced operation, despite their inherent asymmetry.

Since 1984, Coaxicom have been manufacturing Microwave and RF Coaxial Adapters, Attenuators, Cable Assemblies, Connectors, DC Blocks, Phase Adjusters, Shorts, Terminations, and Torque Wrenches. Below are links to the specification sheets for Coaxicom Products. For information on products from Coaxicom’s broad line of connectors, adapters, terminations, attenuators, phase adjusters, and cable assemblies, contact our Coaxicom Team at 866-Coaxicom (262.9426) or via email to sales@coaxicom.com.