You may have an older device that you need a replacement cable for, but you have no idea where to start. You may be stuck with a part number that isn’t coming up in any of your searches or you might need a custom cable assembly that the manufacturer of the original cable might not provide.

Then get the coax cable connectors you need! Just place the part number in the dialog box and find the corresponding Coaxicom part. By using this cross referencing tool, you can find a higher quality, less expensive replacement part than searching the internet for a used cable, going back to the manufacturer, or trying to make it yourself.

Visit www.Coaxicom.com or call 866-262-9426 if you need any additional help locating the right RF Connector for your job.

[Stuart, Florida – August 24, 2018] – Connecting Customers with the Right Components Since 1984. Coaxicom’s mission is to provide high quality made in America products at competitive prices and ensure complete Customer satisfaction. Coaxicom’s extensive resources including expert machinists enable you, our Customer, to focus on your operational needs. At Coaxicom, we understand the importance of adapting our services on an ongoing basis to keep pace with our Customers’ changing needs. We continually strive to be the best every day, with each Customer we serve. See what some of our oexisting customers are saying about Coaxicom here.

Finding the best coaxial connectors for your applications can be difficult. Often times you visit a website and they are either scaling back their once vast selection or no one is available to help you. Searching for coaxial cable connectors is easier online, but you come across sites that don’t have the exact specifications you are looking for.

With our custom cable builder, not only can you get the highest quality coaxial cable connectors, but you can also create the exact cable assembly you need no matter how out of the ordinary! Cut to any custom length and in a variety of cable types!

Whether you need an array of special cables for a test lab, putting a satellite into space, or you are working on cable assemblies for a missile project, you can get the best coaxial cable connectors from the most trusted names in RF and microwave products. Choose Coaxicom as your custom assembly builder today.

The low-frequency attenuator line is available in Type N (5910) and  SMA (3910) series with an average power rating of 2 watts. The attenuators are available in reverse polarity, between series adapters, as well as 50 or 75 Ohm. These new attenuator models are RoHS and REACH compliant and range from 1 dB up to 30 dB.

Coaxial Components Corp specializes in the manufacturing and sales of RF Connectors, attenuators, terminations, adapters and cable assemblies. The company serves Customers in the telecommunications, aerospace, industrial, energy, transportation and military sectors. All Coaxicom connectors conform to applicable Military standards, industry standards and specifications.  For more information or to order a product catalog, visit Coaxicom.com or call 866-Coaxicom. Coaxicom products are also available through our ever growing network of International Representatives and Authorized Stocking Distributors in the USA and abroad.

An appetite for ‘American Made’ 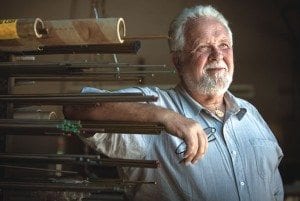 The 18-employee company, known as Coaxicom, makes military-grade connectors, adapters and cable assemblies used in sophisticated communications systems. For several years, customers had switched to cheaper Asian-made products, but the company says the lower quality eventually turned customers off. “There’s an industry out there that’s looking for quality products and made in the U.S.A.,” says David Leiman, company founder and president. “Now in the international market … companies are no longer going toward the low-price products.”

Coaxicom, which has seen a 500% increase in sales to Chile, for example, is not alone in benefiting from the trend. Between 2000 and 2011, exports manufactured in Florida grew 143%, and small businesses like Coaxicom account for 67% of the state’s exports.

Although overseas customers have purchased from Coaxicom since a few years after its 1984 founding, it has done little active marketing outside of a couple of European countries where it has independent sales representatives. Mainly, Leiman says, “people found us.” That’s what happened in Chile, for instance, where Coaxicom’s main customer is the government. But when another company approached Coaxicom about making private-label products for sale in South America, Leiman and his team began researching the market. Ultimately, he decided to hire an internal team devoted to international sales.

For the most part, Coaxicom, whose parts typically sell for between $5 and $10 apiece, is looking for independent sales representatives or authorized distributors in other countries. The company expects that approach will help it mitigate some of the risks of doing business outside the U.S. Risks include the cost of international collections on sales that tend to be small — between a few hundred and a few thousands dollars each. Also, because Coaxicom’s parts have military applications, the company has to know exactly who its users will be. It’s easier for a local company to do that vetting.

Leiman says the potential sales justify dealing with those hurdles. Right now, international business makes up only about 20% of Coaxicom’s revenue, but he’s so confident in its growth that he’s looking to more than double the company’s current space.

STUART, FLORIDA –  As the global economy continues to improve, US manufacturing jobs are also on the rise. Electrical engineers and project managers have focused their attention on replacing low-cost imports with high-quality, American-made electrical components.

The impact is being felt in South Florida, as Coaxial Components Corp. expands its sales team with three new Regional Sales Managers.  The new team members include Joel Smith, Penny Perkins and Stephanie Clark.  Smith’s vast experience in high-performance manufacturing includes design, programming, manufacturing and distribution for Biomet 3is in Palm Beach Gardens, Florida.  Clark has returned to Coaxicom where she began her career in RF connector manufacturing.  Perkins is new to the industry, bringing a background in customer service from a variety of service industries.

The Regional Managers will be servicing national and international accounts for the company’s industry-leading RF connectors, attenuators, terminations, adapters and cable assemblies.

Coaxial Components Corp serves Customers in the telecommunications, aerospace, medical, industrial, energy, transportation and military sectors. All Coaxicom connectors conform to applicable Military standards, industry standards and specifications.  For more information or to order a product catalog, visit www.Coaxicom.com or call 866-Coaxicom. Coaxicom products are also available through our ever growing network of International Representatives and Authorized Stocking Distributors in the USA and abroad.

STUART, FLORIDA – Over the past several years, many businesses have faced increased financial constraints due to the stagnant global economy. As American companies tightened their belts, operational budget reductions became common place across many industries. While project specifications remained intact, tighter budgets often became a determining factor in acquiring critical RF components. All too often, the stringent quality standards and skilled labor of US manufacturing resulted in higher costs, requiring a compromising choice between quality and price.

Founded in 1984, Coaxial Components Corp. experienced the challenges from the manufacturing side of the equation. The company’s established reputation for delivering superior quality made Coaxicom one of the leading providers for engineers who mandated top performance and quality.  Recognizing the change in priorities, the company saw an opportunity for a commercial series that delivers uncompromised performance, produced through a high-volume manufacturing solution.

“I’ve heard from many of our best customers that a commercial line of Coaxicom products would fill a void in the industry,” says Julian Andrews, Operations Manager for Coaxial Components Corp. “As a result, our team developed a G-series of microwave components that will be priced competitively with imported connectors. This product line will meet the superior design standards established in our current Coaxicom line.”

Coaxial Components Corp specializes in the manufacturing and sales of RF Connectors, attenuators, terminations, adapters and cable assemblies. The company serves Customers in the telecommunications, aerospace, industrial, energy, transportation and military sectors. All Coaxicom connectors conform to applicable Military standards, industry standards and specifications.  For more information or to order a product catalog, visit Coaxicom.com or call 866-Coaxicom. Coaxicom products are also available through our ever growing network of International Representatives and Authorized Stocking Distributors in the USA and abroad.

STUART, FLORIDA – In response to industry demands, Coaxicom’s engineering team redesigned the standard 2.4mm to 2.9 mm precision adapter series to improve electrical performance. The Inter and Intra series adapters now deliver up to 40 GHz with a lower VSWR than other supplier’s designs. Coaxicom’s high-performance adapters are suitable for use in advanced testing environments required throughout the aerospace, communications and military industries.

Coaxial Components Corp specializes in the manufacture and sales of RF Connectors, attenuators, terminations, adapters and cable assemblies. The Company serves Customers in the telecommunications, aerospace, industrial, energy, transportation and military sectors. All Coaxicom connectors conform to applicable military standards, industry standards and specifications.  The company provides an online industry cross-referencing guide, a valuable tool for purchasing agents. The company’s catalog is also available at Coaxicom.com or by calling 866-Coaxicom.

Coaxicom products are also available through an ever-growing network of International Representatives and Authorized Stocking Distributors in the USA and abroad.

Coaxicom, a leading manufacturer and supplier of RF microwave connectors, has experienced an increase in sales of over 500% from Chile, and new international representatives are focused on servicing the South American market with specific concentration on Brazil and Argentina.  Coaxicom is currently developing a network of representatives to meet the growing demands of Europe, Asia and other foreign markets.

Coaxial Components Corp specializes in the manufacturing and sales of RF Connectors, attenuators, terminations, adapters and cable assemblies. The company serves Customers in the telecommunications, aerospace, industrial, energy, transportation and military sectors. All Coaxicom connectors conform to applicable Military standards, industry standards and specifications.  For more information or to order a product catalog, visit www.Coaxicom.com or call 866-Coaxicom. Coaxicom products are also available through our ever growing network of International Representatives and Authorized Stocking Distributors in the USA and abroad.

Coaxicom products are also available through our ever growing network of International Representatives and Authorized Stocking Distributors in the USA and abroad.

“We are pleased with the extensive background Mr. Feys adds to the CCC Team,” says Julian Andrews, Operations Manager.  “With 25 years of quality assurance experience in the manufacturing and automotive industries, Chris brings a unique insight to our stringent processes and daily operations.”

As QA Manager, Feys will have overarching responsibility for all cable and connector assembly as well as product manufacturing quality control.  Feys will also play an instrumental role in administering the ISO 9001:2008 and the AS 9100C processes for the company.  The Stuart, Florida firm manufactures, among others, SMA, SMB, SMC, SSMB, SSMC, SSMA, Type N, TNC and phase adjustable connectors, in addition to cable assemblies for commercial and military applications.

Prior to joining the company, Feys relocated to the Treasure Coast from Northern Michigan where he spent 25 years in the manufacturing industry.  In his previous capacity, he was responsible for quality engineering inspections, detailed project management, QOS functions, and Customer liaison and audit functions.  Chris assisted in achieving QS 9000 and ISO certification for two independent facilities.