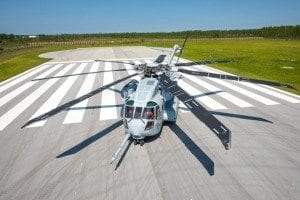 Lockheed Martin announced yesterday in a company press release that it is acquiring Sikorsky Aircraft.

Sikorsky, builder of the H-60 Black Hawk family of helicopters as well as the H-53 series and the H-92 that is being developed as the newest presidential transport, was acquired for $9.0 million, according to Lockheed Martin.

“Sikorsky is a natural fit for Lockheed Martin and complements our broad portfolio of world-class aerospace and defense products and technologies,” said Marillyn Hewson, Lockheed Martin chairman, president and CEO, in the release. “I’m confident this acquisition will help us extend our core business into the growing areas of helicopter production and sustainment. Together, we’ll offer a strong portfolio of helicopter solutions to our global customers and accelerate the pace of innovation and new technology development.”

As Lockheed Martin does not at present build helicopters, the acquisition will open a new business segment for the company. As well as the ubiquitous H-60 family used by the Army, Navy, and Coast Guard, Lockheed Martin will be acquiring newer aircraft programs such as the VH-92 and CH-53K and the company-funded S-97 Raider compound helicopter. The acquisition will still have to go through the regulatory approval process, but is expected to conclude by the late fourth quarter of 2015 or early in the first quarter of 2016.

Lockheed Martin and United Technologies Corporation, Sikorsky Aircraft’s parent company, agreed to “make a joint election under Section 338(h)(10) of the Internal Revenue Code, which treats the transaction as an asset purchase for tax purposes,” according to the release. Lockheed Martin says that after taking into account tax benefits resulting from the transaction, this effectively reduces the price to approximately $7.1 billion.

According to Lockheed Martin, the company plans to align Sikorsky under its Mission Systems and Training (MST) business segment, as MST and Sikorsky already partner on the Combat Rescue Helicopter, VH-92 Presidential Helicopter, and naval MH-60 helicopter.