Magnetic Fields for Wireless Communication Through the Body 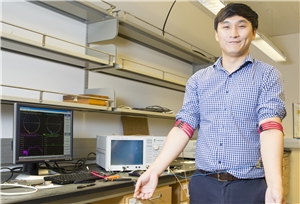 Electrical engineers at the University of California, San Diego have demonstrated a new wireless communication technique that works by sending magnetic signals through the human body. They demonstrated this at the 37th Annual International Conference of the IEEE Engineering in Medicine and Biology Society in Milan, Italy. The new technology could offer a lower power and more secure way to communicate information between wearable electronic devices, providing an improved alternative to existing wireless communication systems, researchers said.

While this work is still a proof-of-concept demonstration, researchers envision developing it into an ultra low power wireless system that can easily transmit information around the human body. An application of this technology would be a wireless sensor network for full-body health monitoring.

The new study presents a solution to some of the main barriers of other wireless communication systems: in order to reduce power consumption when transmitting and receiving information, wireless systems need to send signals that can easily travel from one side of the human body to another. Bluetooth technology uses electromagnetic radiation to transmit data, however these radio signals do not easily pass through the human body and therefore require a power boost to help overcome this signal obstruction, or “path loss.”

In this study, electrical engineers demonstrated a technique called magnetic field human body communication, which uses the body as a vehicle to deliver magnetic energy between electronic devices. An advantage of this system is that magnetic fields are able to pass freely through biological tissues, so signals are communicated with much lower path losses and potentially, much lower power consumption. In their experiments, researchers demonstrated that the magnetic communication link works well on the body, but they did not test the technique’s power consumption. Researchers showed that the path losses associated with magnetic field human body communication are upwards of 10 million times lower than those associated with Bluetooth radios.

The researchers also pointed out that this technique does not pose any serious health risks. Since this technique is intended for applications in ultra low power communication systems, the transmitting power of the magnetic signals sent through the body is expected to be many times lower than that of MRI scanners and wireless implant devices. 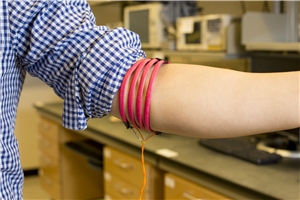 The researchers built a prototype to demonstrate the magnetic field human body communication technique. The prototype consists of copper wires insulated with PVC tubes. On one end, the copper wires are hooked up to an external analyzer and on the other end, the wires are wrapped in coils around three areas of the body: the head, arms and legs. These coils serve as sources for magnetic fields and are able to send magnetic signals from one part of the body to another using the body as a guide. With this prototype, researchers were able to demonstrate and measure low path loss communication from arm to arm, from arm to head, and from arm to leg.

Researchers noted that a limitation of this technique is that magnetic fields require circular geometries in order to propagate through the human body. Devices like smart watches, headbands and belts will all work well using magnetic field human body communication, but not a small patch that is stuck on the chest and used to measure heart rate, for example. As long as the wearable application can wrap around a part of the body, it should work just fine with this technique, researchers explained.