A group of NASA and National Oceanic and Atmospheric Administration (NOAA) scientists are teaming up this month for an airborne mission focused on studying severe storm processes and intensification. The Hand-On Project Experience (HOPE) Eastern Pacific Origins and Characteristics of Hurricanes (EPOCH) field campaign will utilize NASA’s Global Hawk autonomous aircraft to study storms in the Northern Hemisphere to learn more about how storms intensify as they brew out over the ocean.

The scope of the mission initially focused only on the East Pacific region, but was expanded to both the Gulf and Atlantic regions to give the science team broader opportunities for data collection.

“Our key point of interest is still the Eastern Pacific, but if the team saw something developing off the East coast that may have high impact to coastal communities, we would definitely recalibrate to send the aircraft to that area,” said Dr. Amber Emory, NASA’s principal investigator.

Having a better understanding of storm intensification is an important goal of HOPE EPOCH. The data will help improve models that predict storm impact to coastal regions where property damage and threat to human life can be high.

NASA has led the campaign through integration of the HOPE EPOCH science payload onto the Global Hawk platform and maintained operational oversight for the six planned mission flights. NOAA’s role will be to incorporate data from dropsondes, devices dropped from aircraft to measure storm conditions, into NOAA National Weather Service operational models to improve storm track and intensity forecasts that will be provided to the public. NOAA first used the Global Hawk to study Hurricane Gaston in 2016.

With Global Hawk flying at altitudes of 60,000 feet, the team will conduct six 24 hour-long flights, three of which are being supported and funded through a partnership with NOAA’s Unmanned Aircraft Systems program.

NASA’s autonomous Global Hawk is operated from NASA’s Armstrong Flight Research Center at Edwards Air Force Base in California and was developed for the U.S. Air Force by Northrop Grumman. It is ideally suited for high-altitude, long-duration Earth science flights.

The ability of the Global Hawk to autonomously fly long distances, remain aloft for extended periods of time and carry large payloads brings a new capability to the science community for measuring, monitoring and observing remote locations of Earth not feasible or practical with piloted aircraft or space satellites. 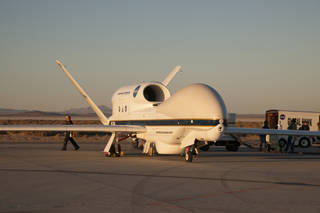 The science payload consists of a variety of instruments that will measure different aspects of storm systems including wind velocity, pressure, temperature, humidity, cloud moisture content and the overall structure of the storm system.

Many of the science instruments have flown previously on the Global Hawk including the High-Altitude MMIC Sounding Radiometer (HAMSR), a microwave sounder instrument that takes vertical profiles of temperature and humidity, and the Airborne Vertical Atmospheric Profiling System (AVAPS) dropsondes, which are released from the aircraft to profile temperature, humidity, pressure, wind speed and direction.

New to the science payload is the ER-2 X-band Doppler Radar (EXRAD) instrument that observes vertical velocity of a storm system. EXRAD has one conically scanning beam as well as one nadir beam, which looks down directly underneath the aircraft. This is different from HIWRAP, which has two conically scanning beams. EXRAD now allows researchers to get direct retrievals of vertical velocities directly underneath the plane.

The EXRAD Instrument is managed and operated by NASA’s Goddard Space Flight Center in Greenbelt, Maryland, and the HAMSR instrument is managed by the NASA Jet Propulsion Laboratory in California. The National Center for Atmospheric Research developed the AVAPS dropsonde system, and the NOAA team will manage and operate the system for the HOPE EPOCH mission.

Besides the scientific value that the HOPE EPOCH mission brings, the campaign also provides a unique opportunity for early-career scientists and project managers to gain professional development.

HOPE is a cooperative workforce development program sponsored by the Academy of Program/Project & Engineering Leadership (APPEL) program and NASA’s Science Mission Directorate. The HOPE Training Program provides an opportunity for a team of early-entry NASA employees to propose, design, develop, build, and launch a suborbital flight project over the course of 18 months. This opportunity enables participants to gain the knowledge and skills necessary to manage NASA’s future flight projects.

Emory started as a NASA Pathways Intern in 2009. The HOPE EPOCH mission is particularly exciting for her, as some of her first science projects at NASA began with the Global Hawk program.

The NASA Global Hawk had its first flights during the 2010 Genesis and Rapid Intensification Processes (GRIP) campaign. Incidentally, the first EPOCH science flight targeted Tropical Storm Franklin as it emerged from the Yucatan peninsula into the Gulf of Campeche along a track almost identical to that of Hurricane Karl in 2010 that was targeted during GRIP and where Emory played an important role.

“It’s exciting to work with people that are so committed to making the mission successful,” Emory said. “Every mission has its own set of challenges, but when people come to the table with new ideas on how to solve those challenges, it makes for a very rewarding experience and we end up learning a lot from one another.”

For a welcome package that includes a FREE sample of our quality connectors, please complete the fields below.