The league partnered with Zebra Technologies to install its radio-frequency identification (RFID) system, called MotionWorks, in 18 stadiums, and that tracking system has now been rolled out elsewhere, including Wembley in London. Now it helps NFL teams run their football logistics and track their inventories across the playing field. 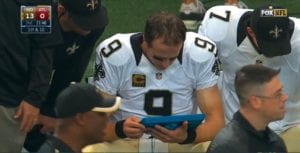 Though a major motivator for using this RF technology is to improve the TV experience for fans, three teams in particular—the 49ers, Lions, and Saints—have embraced using it not just during games, but in practice, too. “Our first-year goal was a way to monitor each player during the course of the work week,” says head coach of the Saints. By keeping an eye on distances and speeds run in practice, the Saints modified training to try and reduce soft-tissue injuries. 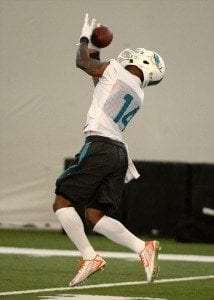 According to Payton, players were immediately interested in their personal statistics. “The lineman started walking in circles,” he says. “What are you doing?” Payton asked them. “Well we’ve got to get our numbers up,” they replied.

If you’ve been into any major store in the last decade or so, you’ve probably noticed the strange little stickers with flat square spirals of wire on boxes of electronics or CD cases. You’ve almost certainly walked past the metal hoops guarding the inside of store entrances, and maybe even set off the occasional alarm when the RFID chip on something you just bought hadn’t been properly disarmed.

The technology in the NFL uses essentially the same idea, except that while most RFID tags in stores are passive and need to pass through a sensor to be detected, the bottle-cap sized chips inserted into the shoulder pads of NFL players actively send out their own radio signals. This information is then picked up by a series of 20 receivers placed high up in the stadium, and the location of each player can then be worked out through triangulation. Additionally, each RFID chip is Bluetooth-compatible, and could be used to re-transmit information from any biometric sensors. 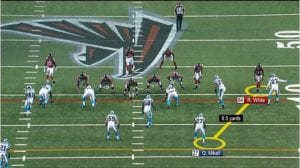 The shoulder pad location was chosen both to give the best line of sight to the receivers, and because it allows MotionWorks to track direction. “Left and right gives you orientation, so we know if you’re running backwards,” explains Jill Stelfox, Vice President and General Manager of Location Solutions (the part of Zebra Technologies that runs MotionWorks). 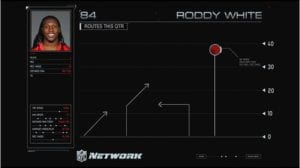 ​​Though only 18 stadiums were originally equipped with the tracking system, every single player on every single team had the tags installed in his pads before the first regular season game. He carried them around deactivated until he walked out through the locker room door to the field at one of the active stadiums, when a device placed above the doorframe would wirelessly switch the tags on, and the player would pop up on the screens of MotionWorks’ headquarters in San Jose, Calif.

Zebra first began to explore opportunities in sports with the Shanghai women’s soccer team in 2011 and then the University of Washington football team in 2013. That same season, the NFL ran a test of several different tracking systems, and picked MotionWorks. Used to tracking millions and millions of RFID tags on automotive production lines around the world every single day, handling a few thousand NFL players is almost a step down for Zebra. “People talk about the NFL being a scale problem,” Stelfox says. “For us, it’s easy.”

In fact, MotionWorks was able to track the location of the ball to an accuracy of less than six inches. With further development to fine tune the technology, this raises the possibility that Zebra’s system could even one day be used for in-game decisions. “This red hankie with sand in it still sits in my pocket,” Payton complains of the existing system in which he can challenge a call by throwing a red flag onto the field. “We’ve got to figure out a better way to do this.”

The key question right now, though, is how much access teams will have to the data collected by the NFL. Detailed information on other teams’ plays during the season might revolutionize both coaching and play calling. “One of the challenges in football is it’s hard to get the quarterback enough playing time,” Payton explains. In the near future, he predicts, rookie quarterbacks might train the same way pilots do, with virtual snaps in simulators.(content credit:By Tom Taylor, 3/15/15, www.si.com)

Updated: Feb 3, 2018-Coaxial Components Corp. (Coaxicom) designs and manufactures an extensive line of standard, as well as custom microwave and RF connectors all available in 50 or 75 Ohm impedance.

We have proudly served Customers in industries including the US military, automotive, medical, instrumentation, aerospace, defense, telecom, wireless alternative energy and more. Coaxicom is committed to providing outstanding service, value and quality with made in the USA RF Connectors for over 30-years.

Learn more about our RF Connectors.   Return to the website here or complete the info below for free stuff.