Several companies are developing appealing robot companions, but they aren’t yet capable of helping out around the house.

f you visit Softbank’s flagship store in downtown Tokyo, you may be greeted by a charming, slightly manic new member of the staff: a gleaming white humanoid robot that gestures dramatically, cracks odd jokes, and occasionally breaks out dancing to music emanating from its own body. If you laugh at these antics, and the robot can see your face, it will quite likely giggle along with you.

With significant progress currently being made toward safer and more intuitive industrial robotics, it’s perhaps unsurprising that the idea of personal home robots is gaining momentum. Toy robots that interact with people in simple ways have been around for some time. Now, several companies are developing more capable robots designed to live in the home. Although these machines don’t do physical chores, they aim to win your affections with a mix of charm and a stilted social intelligence.

Softbank sold a thousand of its robots, called Pepper, in Japan in less than a minute this June; a thousand more will go on sale next week. “We have people who are interested in testing them in their businesses, for welcoming people; we have families, also elderly people interested in companionship,” says Magali Cubier, global marketing director for Aldebaran, the French company that developed Pepper for Softbank. 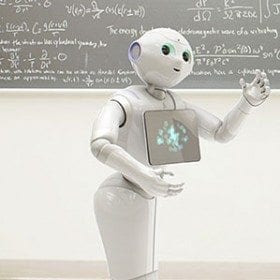 Pepper, the Robot Hopes to be Big in Japan

Pepper costs $1,595 up front plus a monthly subscription of $120, which covers maintenance and updates. The robot is petite by human standards—47 inches tall—with a tablet display in its chest, slightly beady black eyes, and a three-wheeled base on which it careens around. It includes a stereoscopic camera, capable of recognizing people and identifying their facial expressions up to 10 feet away.

Aldebaran recently released a software development kit for Pepper, allowing outside developers to give the robot new capabilities. The first batch of apps includes one that lets Pepper run a musical quiz and another that lets it take selfies with people. Others are more practical, including one that helps people with dementia remember to take their medicine.

Aldebaran has not disclosed when it might make Pepper available outside Japan, but other personal robots will soon be available elsewhere.

Jibo, for example, is a simple personal robot being developed by a company based in Cambridge, MA, that was cofounded by Cynthia Breazeal, an associate professor at the MIT Media Lab. She says that cheap mobile electronics, combined with growing consumer acceptance of novel technologies and interfaces, make robots like Jibo commercially viable.

Although Jibo is still under development, a video accompanying a crowdfunding page set up to attract investment suggests that the robot could provide personal services like appointment reminders, take family snapshots, and read bedtime stories to children, moving its head expressively and showing animations on its screen as it does. “It’s a different experience, a more interpersonal experience,” Breazeal says. “You can imagine a whole range of applications around news, weather, but also educational content, a health coach to help you manage your weight.”

Breazeal isn’t the only one who spies an opportunity. A French company called Bluefrog Robotics is developing a similar product, called Buddy, which will also have wheels that allow it to move around. Like Jibo, Buddy is partly funded through a crowdfunding campaign, and its project page promises that the robot could serve as a personal assistant, a communications tool, and a security device.

Indeed, personal robots will probably need to prove themselves useful as well as charming if they are to succeed. The capabilities promised for Jibo and Buddy are a long way from the Hollywood vision of intelligent home robots, and Breazeal admits that there is a risk of disappointing consumers.

“A robot that only sings and dances is not going to sell well,” says Rodney Brooks, a professor emeritus at MIT and cofounder of iRobot, which makes the Roomba vacuum cleaner, as well as Rethink Robotics, which makes a low-cost, easy-to-use factory robot. Brooks concedes, though, that customers may be willing to build relationships with home robots. “A lot of people treat their Roombas as companions, in a very limited way,” he says. “Maybe that’s what will make these companies successful.”   (article credit: Will Knight, July 2017, MIT Technology Review, https://www.technologyreview.com, Connectivity)

As a trusted manufacturer for over 30-years, I know that you will extremely satisfied with the quality and service we provide to each and every customer. We have the pleasure of working with companies both large and small, and from around the globe. Now we look forward to working with you.

Plus, there is a full spectrum of engineering services and an advanced cross reference tool that allows you to quickly identify the Coaxicom part that meets your requirements. The in-depth database includes product lines from Americon, AMP, Amphenrol, CDI, Huber Suhner, ITT Pomona, Fairview, Omni-Spectra, Pasternack, Radiall, SV Microwave, and Tyco. So it is very easy to find a comparable piece at a lower price and always with better service and support.

Be sure to get the latest Coaxicom Welcome Package complete with 90-page catalog with product drawings, specs, and engineering insights.