Pi Day is celebrated on March 14, or in the month/day date format as 3/14; since 3, 1 and 4 are the three most significant digits of pi. March 14 is also the birthday of Albert Einstein so the two events are sometimes celebrated together. 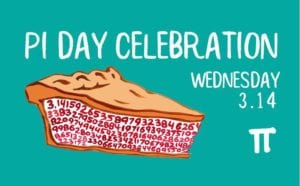 There is a large variety of ways of celebrating Pi Day and most of them include eating pie and discussing the relevance of pi. Pi Day is often celebrated with pies, given that pi and pie are homophones.

The first Pi Day celebration was held at the San Francisco Exploratorium in 1988, with staff and public marching around one of its circular spaces, then consuming fruit pies. The museum has since added pizza to its Pi Day menu.

The founder of Pi Day was Larry Shaw, a now-retired physicist at the Exploratorium who still helps out with the celebrations. (content credit: www.cute-calendar.com)

How will you celebrate?

[UPDATED: 3/9/2018] – STUART, FLORIDA – Coaxial Components Corp. (Coaxicom), a company dedicated to the design and manufacturing of RF and Microwave components is honored to be a “spoke in the wheel” on many of today’s engineering and research achievements.

Companies and organizations from around the globe seek Coaxicom’s parts and expertise because we’ve earned the reputation for military-grade quality, speed and innovation.