How does a polar satellite see the world?

The launch of the Joint Polar Satellite System-1 means access to some of the most-accurate, highest-fidelity, near-real-time weather data in the world. JPSS-1 is joining the satellite Suomi-NPP, its predecessor, in a sun-synchronous, polar orbit that will cross the Earth’s surface twice a day.

“Americans have intently followed the media coverage this hurricane season, watching severe storms unfold one after another,” said Mark Sargent, Raytheon’s Joint Polar Satellite System Common Ground System program director. “Our forecasting ability has dramatically improved over the last decade and polar satellites deserve most of the credit. And it’s about to get better.” 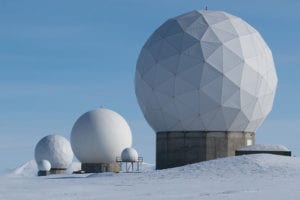 The National Weather Service reports that 85 percent of the data flowing into American weather forecast models comes from “polar orbiters,” providing the public with improved, long-range forecasting up to seven days out.

Next-gen satellites are only one component of a broader modernization effort. The National Oceanic and Atmospheric Administration has partnered with NASA and Raytheon to improve and expand JPSS CGS, its ground control operation.

JPSS CGS is a global system of ground antennas and high-performance computers that process more than 11 terabytes of weather information every day. In August 2017, the next-gen JPSS CGS 2.0 began supporting all JPSS satellites currently in the constellation, while making room for additional missions in the future.

The upgraded system’s flexible architecture and consolidated infrastructure drive fresher observations from outer space to meteorologists, scientists and emergency officials more quickly and reliably than ever before.

“The initial capture of the polar satellite data happens at the North and South poles before we process it and push it out to the forecasters and science community,” Sargent said. “With the addition of JPSS-1, we’ll be able to deliver more observations to the National Weather Service almost twice as fast.”

Launched in 2011, the Suomi-NPP satellite was the first into space with Raytheon’s Visible Infrared Imaging Radiometer Suite of sensors. VIIRS, which will be mission-critical hardware for JPSS-1 as well, provides an unprecedented level of detail and has already helped to make weather forecasts more precise.

“From 500 miles up in space, VIIRS is changing the way we see Earth, and its value goes well beyond weather forecasting,” said Robert Curbeam, director of Civil Space programs for Raytheon’s Space and Airborne Systems business.

The only satellite sensor in the world that can track weather both day and night, it collects imagery in 22 bands of light—from visible to infrared—allowing scientists to observe emerging weather and climate patterns in unprecedented detail, a capability that’s particular important to military operations.

“As a former U.S. Navy pilot, I know the need for accurate, precise weather forecasting is critical … but we take for granted that we’re always going to have it,” said Curbeam, a former astronaut. ”It can make the difference between a successful and an unsuccessful mission.”

When it comes to forecasting, successful missions translate to every industry.

When Hurricane Harvey made landfall in Houston, Texas, in August 2017, it was the costliest storm in U.S. history. Damage estimates ran in the hundreds of billions of dollars. One of the major issues: the city’s overall floodplain design.

“We don’t often think about the importance of weather data when it comes to updating an aging infrastructure, but we should,” said Mike Fox, Raytheon’s corporate lead for civil space and weather programs. “While infrastructure bolsters safety and growing economies, extreme weather tests it to its very limits.”

“We have access to this incredible, one-of-a-kind weather data,” said Fox. “We should use it in our city planning to reduce the chances of neighborhoods being inundated with floodwater.”

Or wildfires. In October 2017, more than 100,000 acres in California were consumed by fire, destroying countless homes and killing nearly a dozen people. The unfolding catastrophe was monitored from space, directly informing evacuation and rescue efforts.

Coaxicom, a supplier of RF connectors, and cable assemblies to Raytheon for several years  provides high quality products at economical prices to ensure uncompromised satisfaction—allowing Customers to focus on operational needs. And its Coaxicom’s promise to be the best every day, with each Customer we serve.

What differentiates Coaxicom from all the others?

Locating the part you need quickly is vital to production, so Coaxicom can cross most competitor’s products and supply a part equivalent easily. Coaxicom’s cable builder can aid in finding the assembly you need or design your own from any combination of in-stock compatible connectors and cables.

Request the latest catalog that includes updated drawings, and specs.