Light the Way to Quantum Computing

Integrated photonics may light the way to quantum computing

Since the 1980s, researchers have been chasing after the quantum computer. Such a computer, they believe, could transform the task of information processing by handling data in novel, unprecedented ways. Whereas current computers can only process bits that occupy one of two states (0 or 1), one promising implementation of the quantum computer would rely on arrays of atoms in quantum states, called qubits.
Thanks to the strange nature of the quantum realm, qubits can occupy both the 0 and 1 states simultaneously and can also be entangled with, and thus closely influenced by, one another. Researchers are just beginning to explore the potential processing power that these qubits could unlock.

Yet, the quantum computer has always remained just out of reach because of various fabrication difficulties. For example, researchers are able to manipulate only a small number of qubits — on a scale of tens — as opposed to the required thousands or millions.

“Across all the groups in the world that are working on quantum computing, no one has developed a way to control a very large number of qubits such that you can use them to perform an actual computation of interest,” said Jeremy Sage, a member of the technical staff in Lincoln Laboratory’s Quantum Information and Integrated Nanosystems Group. “We can’t yet do anything that is both practical and better than what a classical computer can do.”

Sage and John Chiaverini, a senior staff member in Sage’s group, lead a team that is pursuing scalability by merging photonic integrated circuits (PICs) with a quantum computing method based on charged atoms, or ions, trapped above the surface of a chip. In 2016, in collaboration with MIT, the team demonstrated that PICs could be used to effectively manipulate the quantum states of ions by performing quantum gates. A quantum gate is the quantum version of a logic gate, which processes information by producing output bits (or qubits) based on inputs and a simple set of logical rules. The Laboratory team’s most recent milestone represents a breakthrough in the precise delivery of light from lasers to the trapped ions by significantly extending the range of wavelengths over which the PICs operate.

“We use lasers to rip off electrons, cool the ions down, and perform quantum gates,” Sage said. These changes to the ions that the lasers bring about are what would power the quantum computer. The ions that the team chose to use for their research are strontium and calcium, which react to specific wavelengths of light. “It turns out we need about 12 different laser colors that range from the near-ultraviolet to the near-infrared,” Sage added. 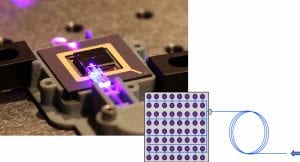 At the moment, most researchers shine lasers through windows in vacuum chambers to

strike the ions, but this approach leaves a lot of room for error. While it’s possible to hit a few individual ions precisely, scaling to the millions introduces a high probability of hitting the wrong one.

“What we’re trying to do is deliver the light in a different way by integrating the required light-delivery optics into the chip itself,” Sage explained.

“Our PICs distribute the light from several input lasers to an array of trapped ions,” said Paul Juodawlkis, assistant leader of the Quantum Information and Integrated Nanosystems Group, who leads the integrated photonics projects at the Laboratory. “At each trapped-ion site, we use devices called vertical grating couplers to redirect the laser light out of the PIC and focus it on an individual trapped ion.”

Instead of shining lasers through windows, the Laboratory team uses an optical input that is plugged into the chip. The input sends the lasers through the chip to the ion of interest via paths called waveguides that are specific to each wavelength of light. When the light has reached the area on the chip that correlates with the targeted ion, it emerges through the vertical grating coupler out of the chip and triggers the ion to change states.

The PIC technology needed to create this type of chip is already used extensively in the world of tele- and data communications. Yet these PICs are traditionally made of silicon, which absorbs the wavelengths of light required to manipulate the ions rather than allowing them to propagate through the chip.

Therefore, the research team developed alternate materials: silicon nitride and alumina. This year, they demonstrated a low propagation loss, meaning a small diminishment of the light as it is sent through the chip to meet an ion, while delivering light across a wide spectrum, from the near ultraviolet to the near infrared. The team’s work is the first-ever successful demonstration of a low-loss integrated photonics platform with light delivery over such a spectrum.

“We also demonstrated that the [vertical] gratings do indeed work,” said Suraj Bramhavar, another researcher on the team. “We are now working on ways to make these gratings more efficient so that more of the light we inject into the waveguide will reach the ion.”

“I think the ion-trapping field outside of the Laboratory is paying very close attention to what we’re doing here,” Sage said. “We are one of the leaders in this effort.”The Laboratory is uniquely capable of realizing this chip because of its expertise in integrated photonics and quantum computing, and the fabrication capabilities of its Microelectronics Laboratory.

The research team will continue working on refining the chip design and fabrication process.”There are a number of challenges that need to be addressed before a large-scale, useful quantumcomputer can be realized,” Juodawlkis said. “Estimates of when useful quantum computing will be available range from 10 to 20 years. An increasing number of groups around the world are working to solve the scientific and engineering challenges, and good progress is being made.”(July 9, 2018,/www.ll.mit.edu, Anne McGovern | Technical Communications Group)

And while delivery speed is important, quality is the driving force.

Coaxicom components go through quality control review not just at the end but throughout the manufacturing process. This multi-tier inspection check maintains  consistent quality and product integrity that meets Military specifications MIL-PRF 39012, MIL-A 55339, MIL-C-83517, and MIL-STD-348 as applicable. Learn more about our RF Connectors.