Research from North Carolina State University and Carnegie Mellon University have demonstrated that passing wireless power transfer through a Magnetic Resonance Field Enhancer (MRFE) – which can be as simple as a copper loop – can boost the transfer efficiency by at least 100 percent as compared to transferring through passing it through air. The use of MRFE could potentially boost transfer efficiency by as much as 5,000 percent in some systems. 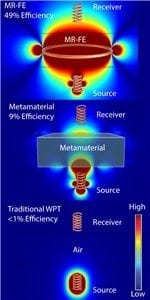 One of the leading candidates proposed for enhancing efficiency has been a technology called metamaterials. David Ricketts, an associate professor of electrical and computer engineering at NC State found out that MRFE could ultimately be five times more efficient than use of metamaterials and 50 times more efficient than transmitting through air alone/.

By placing the MRFE between the transmitter and the receiver (without touching either) as an intermediate material, the researchers were able to significantly enhance the magnetic field thereby increasing its efficiency. The MRFE amplifies the magnetic field while removing very little power from the system. The researchers conducted an experiment that transmitted power through air alone, through a metamaterial, and through an MRFE made of the same quality material as the metamaterial. The MRFE significantly outperformed both of the others. In addition, the MRFE is less than one-tenth the volume of metamaterial enhancers.

A pre-proof draft of the paper, “Magnetic field enhancement in wireless power with metamaterials and magnetic resonant couplers,” is published online in the journal IEEE Antennas and Wireless Propagation Letters. Lead author of the paper is Matthew J. Chabalko, who worked on the project as a postdoctoral researcher at Carnegie Mellon and now works at Disney Research. Jordan Besnoff, a postdoctoral researcher at NC State, is a co-author of the paper.