Robonaut 2, NASA’s first humanoid robot in space, was selected as the NASA Government Invention of the Year for 2014. The NASA selection committee evaluated the robot in the following areas: aerospace significance, industry significance, humanitarian significance, technology readiness level, NASA use, industry use, and creativity.

Robonaut 2 technologies have resulted in 39 issued patents, with several more still under review. The NASA Invention of the Year is the first for a humanoid robot, and another in a series of firsts for Robonaut 2 that include being the first robot inside a human space vehicle operating without a cage, and the first robot to work with human-rated tools in space. 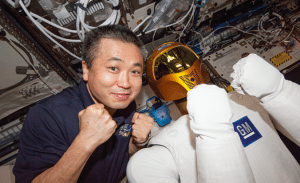