SpaceX’s historic first Falcon Heavy flight will be immediately followed by a historic first landing attempt, too: The commercial space company headed by Elon Musk confirmed over the weekend that the test launch will also include an attempt to recover the three booster cores used by the rocket to propel it to orbit (via Space.com).

The two cores on either side of the rocket will return to LZ-1 and LZ-2, the land-based landing sites at Cape Canaveral Air Force Station in Florida, and the one in the center will try to land back on “Of Course I Still Love You,” the autonomous drone barge that SpaceX uses as a floating landing pad out in the Atlantic Ocean. 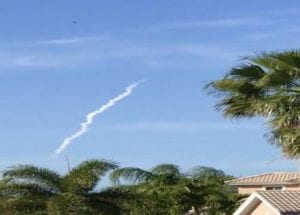 View of the SpaceX Rocket Plume from Coaxicom.com in Stuart, Florida.

Coaxicom understands what customers need today and strives to find innovative ways to deliver by offering: