Since 1984, we have been manufacturing Microwave and RF Coaxial Adapters, Attenuators, Cable Assemblies, Connectors, DC Blocks, Phase Adjusters, Shorts, Terminations, and Torque Wrenches. Below are links to the specification sheets for Coaxicom Products. For information on products from Coaxicom’s broad line of connectors, adapters, terminations, attenuators, phase adjusters, and cable assemblies, contact our Coaxicom Team at 866-Coaxicom (262.9426) or via email to sales@coaxicom.com.

Most cable assembly breakages occur at or near the cable entry area at the rear of the connector. The larger the connector is relative to the outer diameter of the cable, the more prone the assembly is to damage. For example, a type N or 7/16 DIN connector on RG-316 cable is a popular combination, but requires special care since the connectors are large compared to the cable size.
Summarized below are some tips that can extend the life of cable assemblies. They entail assembly procedures and also cautions when actually handling and using the cable assemblies.
If you are purchasing complete cable assemblies, rather than building them in-house, specify the application that they will be used for (routine lab use, production test or a “set-and-forget” application, high power, environmental conditions, etc.).

When trimming flexible cables prior to assembly, care must be taken not to nick and/or cut into the braid components or the center conductor. Special care must be paid to cables with very small diameter center conductors.
The Coaxicom 402BF and 405BF (BF = Blue Flex) cable assemblies are flexible equivalents to RG402 and RG405 semi-rigid cables with comparable performance and should be treated as delicate flexible cables since the diameter of the braid wires are made small to retain flexibility. The FEP outer jacket increases the overall Blue Flex OD slightly compared to the equivalent semi-rigid cable by a little over .020″. Coaxicom can also supply the flexible equivalent to RG401 (401BF) or to the Semi-Flex cables discussed below.

Semi-Flexible cables (also called conformable or hand formable, Ref: Coaxicom 402UF, 405UF) are also very similar to the equivalent semi-rigid cables in performance and OD, but have a copper-tin composite outer jacket which provides the same 100% shielding as semi-rigid. Both Blue Flex and Semi-Flexible cables have solid center conductors that must not be nicked during trimming.

At initial cable assembly it is recommend that one or two layers of adhesive backed shrink tubing be used at the connector/cable interface, extending 1″ or more beyond the cable entry area. This can be done on flexible, semi-flexible and flexible cables, and is particularly important when using large connectors with small diameter cables or when the cable lengths are long or they will be subject to rough handling. On RG58 and RG316 sized cables with BNC series connectors, strain relief boots are often used over the connector/cable interface.
When handling and using cable assemblies do not bend cables tighter than their specified static and dynamic bend radii. During lab usage or installation into a system, minimize bending close to the connector/cable interface area. Use loops instead of sharp bends on the cable where possible. Avoid abrasion points such as sharp edges on test equipment and on units under test. Further, do not pull on cables to free them after connector disengagement. Grip the cable assembly firmly at the connectors to remove them.

Coaxicom has been manufacturing semi-rigid cable assemblies since 1984. We have developed a number of guidelines for the design and dimensioning of cable assemblies that will provide the user with assemblies that are cost-effective, perform well, and are reliable. We incorporate Coaxicom connectors, or those specified by the user. Some of these guidelines are summarized here, and illustrated in the drawing below.
For information on cables described or other products from Coaxicom’s broad line of connectors, adapters, terminations, attenuators, phase adjusters, and cable assemblies, contact our Coaxicom Team at 866. Coaxicom (262.9426) or via email to sales@coaxicom.com.

The standard SMB and SMC series are miniature 50 Ω connectors. The SMB features Snap-On mating and is specified to 4 GHz. SMC connectors are the same size as the SMB but utilize a threaded coupling and are specified to 10 GHz. The Coaxicom CMS series is similar to the SMB, but has slide-on mating. Note that CMS plugs will mate with SMB jacks.

As described in the Coaxicom catalog, these series have interfaces similar to (but 1.5 times larger) than the 50 Ω SMB and 50 Ω SMC series. The 75 Ω Snap-On series is commonly called the SMZ in the industry. They are sometimes also called “Screw-On and Snap-On Conhex series” as a holdover from the original 1960’s designer’s nomenclature.

Mini-75 Ω connectors are matched impedance SMB connectors, normally used with 75 Ω miniature coaxial cables such as RG-179, 187, and Belden 9221. They mate without interference with 50 Ω SMB’s and are most commonly available as cable plugs and jacks, as well as printed circuit board straight and right angle plugs. Because of their small size, they are occasionally called “High Density 75 Ω SMB Connectors”. Some manufacturers use a colored dielectric to differentiate the mini-75 Ω SMB from standard 50 Ω SMB’s, which use a white dielectric. Coaxicom adds a -75 suffix to the 50 Ω part numbers. They are fully mate-able with each other.

For information on cables described or other products from Coaxicom’s broad line of connectors, adapters, terminations, attenuators, phase adjusters, and cable assemblies, contact our Coaxicom Team at 866.Coaxicom (262.9426) or via email to sales@coaxicom.com.

You Have a Team of  Specialists Behind You.

Is anyone out there…. anyone at all?

Sure, this could be a line from any post-apocalyptic, sci-fi movie but truthfully isn’t this also how you feel when dealing with the other “big-brand” RF manufacturers?   Alone. Sometimes confused. Left to figure out what you need, and hoping someone…anyone will get back to you with an answer?

While Coaxicom has been around for over 35-years with a massive in-stock piece part inventory and competitive prices, it still operates under its original core values.  The customer is king…or queen and customer care including quick response times, same day quotes, and expedited delivery remain our daily ethos. At Coaxicom it’s not  just about what we do…it’s how we do it.

This approach extends to our “dream team” of staff specialists. Accessible and friendly, the experienced Coaxicom team will communicate, collaborate and innovate-whether that’s for new product development, a retro-fit or to re-create an obsolete part for older equipment. Coaxicom will partner with you to get the job done and meet your objectives on time and on budget.

Why?  Because that’s who we are, and we strive to meet and exceed your expectations.

How? Because we operate with precision and eliminate the learning curve through years of experience.

Where?  USA-based with sales, engineering, custom manufacturing, assembly, quality assurance and shipping– all working together at one main facility in Stuart, Florida.

So no more unanswered emails. No more endless automated phone prompts. No more waiting for weeks.

Coaxicom has skillfully fused technology with talent­ to become a trusted “one-stop-shop” – whether you have a 25,000-piece order or just researching available product.

Give us a call today. 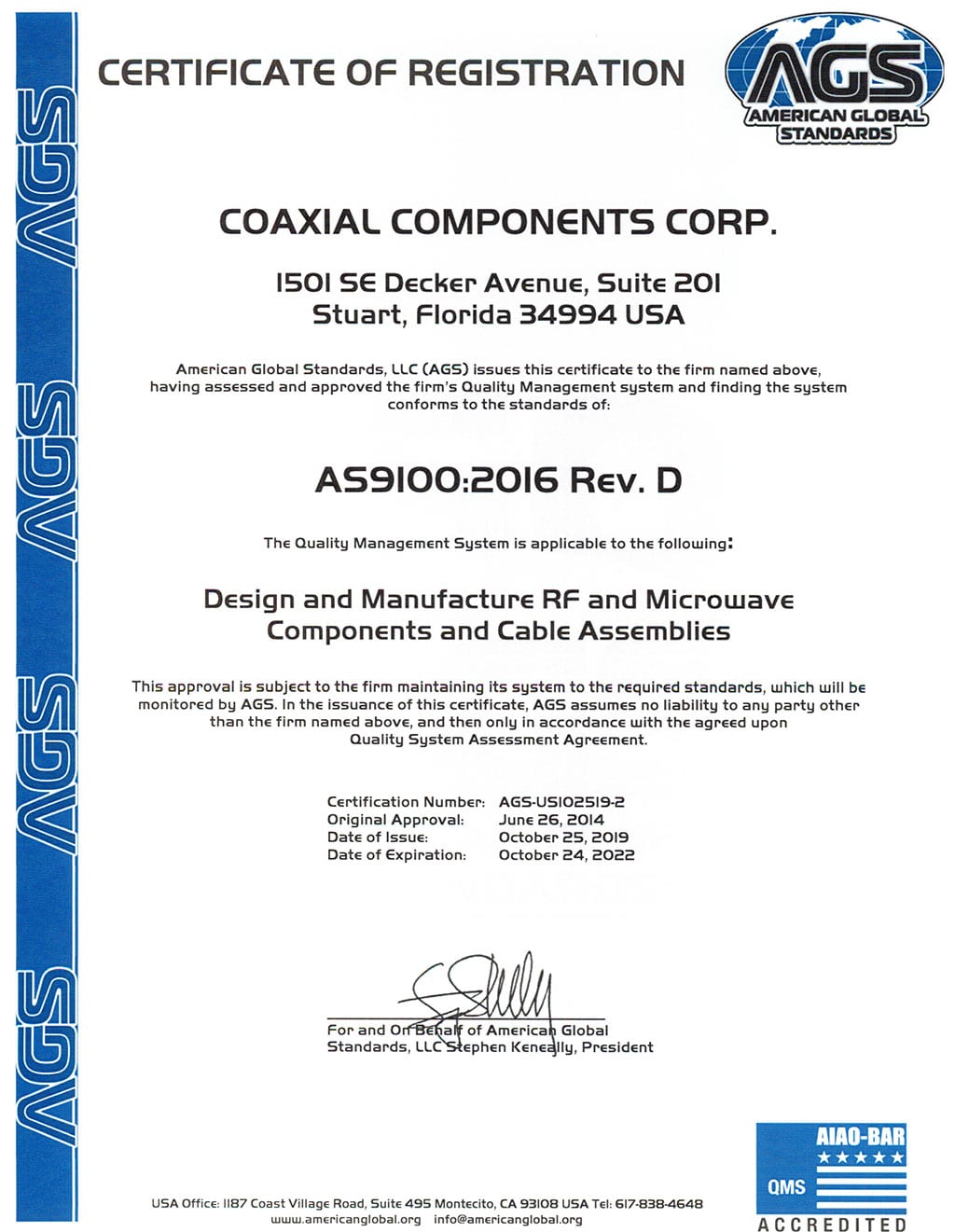 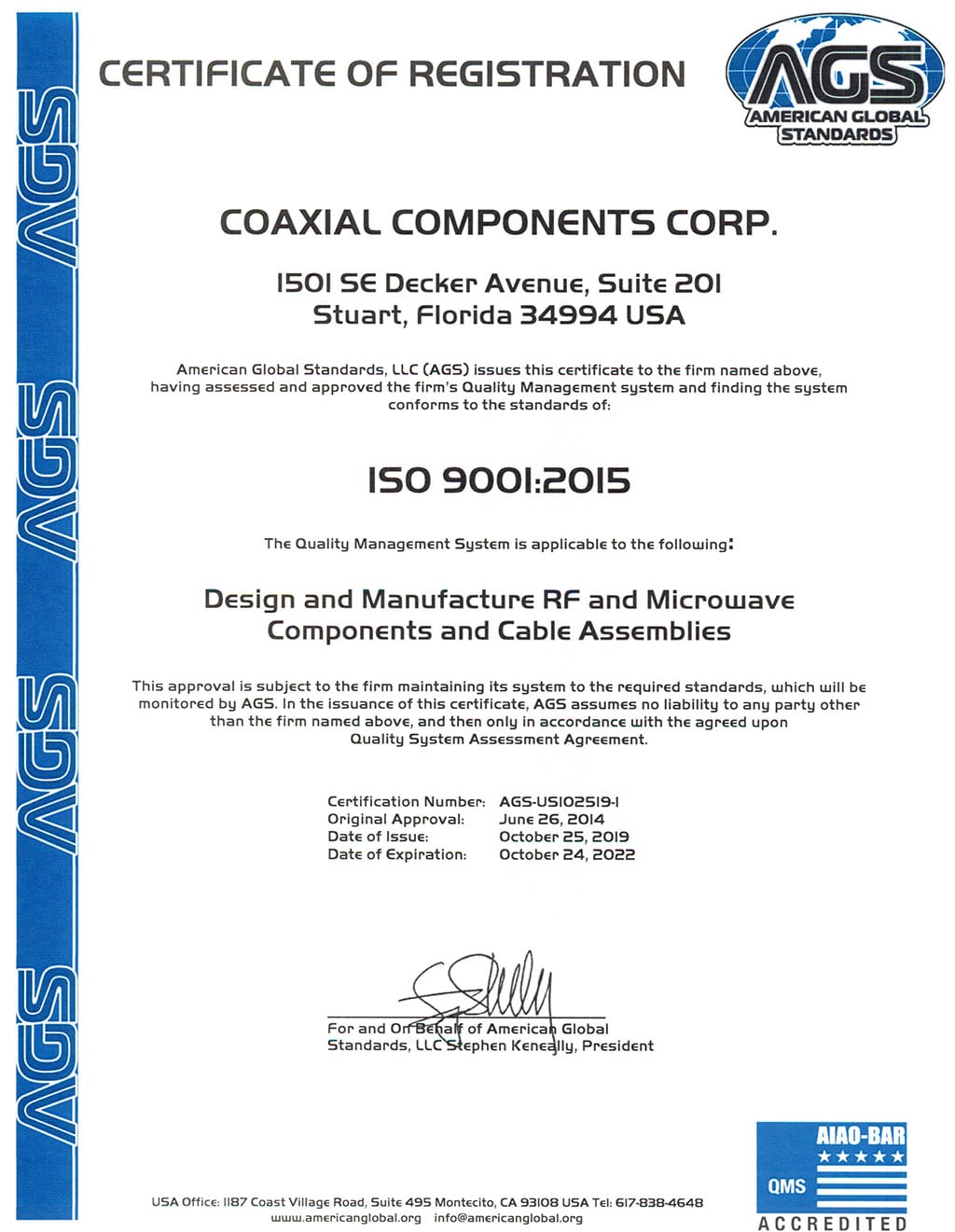