IN SEARCH OF A UNIFIED THEORY BEHIND ST. NICK’S MAGIC.

Santa skeptics have long considered St. Nick’s ability to deliver toys to the world’s good girls and boys in the course of one night a scientific impossibility. But new research shows that Santa is able to make his appointed rounds through the pioneering use of cutting-edge science and technology.

Although researchers have succeeded in keeping St. Nicks detractors at bay, they don’t all agree on the mechanisms by which Santa avoids the killer-G forces and other dangers first mentioned by an article in Spy Magazine back in 1990:

“It is simply impossible to visit all the necessary houses in just 30 hours (24 hourly time zones plus the extra time available from working 10pm in the first zone until 5am in the last).  If such a journey could be made, the acceleration G-forces would be ruinously fatal and in addition (if that wasn’t enough), the friction with the air would burn up the reindeer, sleigh, gifts and Santa anyway.”

Scientists have rushed to St. Nicks defense, realizsing that what modern minds are demanding is no less than a new “General Theory” of Santa Clause. “Santa is using technologies that we are not yet able to recreate in our own labs,” explains North Carolina State University’s Dr. Larry Silverberg.

A key finding from Silverberg’s recent visit to the North Pole is that Santa uses a reversible thermodynamic processor – a sort of nano-toymaker known as the “magic sack” – that creates toys for good girls and boys on site, significantly cutting down on the overall weight of the sleigh. The magic sack uses carbon-based soot from chimneys, together with other local materials, to make the toys. The magic sack works by applying high-precision electromagnetic fields to reverse thermodynamic processes previously thought to be irreversible.

On the PhysOrg site, the Research Council of Norway offers a counter-explanation for many of the Spy Magazine points.

“Santa obviously has an ion-shield of charged particles, held together by a magnetic field, surrounding his entire sleigh. This is how he solves the heat problem,” points out Knut Jørgen Røed Oedegaard https://www.physorg.com/news178996612.html

Gregory Mone in his work titled “The Truth about Santa” postulates that “all of this leads to the only logical conclusion: Santa’s technology is of alien origin.”

“Why would such an advanced alien civilization single out a white-bearded, big-bellied man and outfit him with all that technology? Perhaps they reasoned that by giving someone the tools to deliver gifts across the world, they would accelerate the moral evolution of humanity. Wars would end; diners would leave more generous tips; drivers aiming for the same parking spot would stop and wave each other ahead, saying, “No, take it, it’s yours.”

Despite these contributions, there are still a couple of sticky ‘problems’, both ancient and modern.

First, despite convention and names, it is quite certain that Santa’s eight reindeer are all female.  Any reindeer herder from Lapland will happily tell you that males shed their antlers in early December. 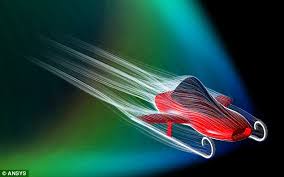 Another perplexing issue: trying to reconcile the goodness and innate “jollyness” of Santa with the god-awful effect his late-night deliveries may be having on the environment. In more modern times, we have become very aware of the carbon footprint of any activity.  David Brooks of the Nashua Telegraph has attempted to make this calculation and the data doesn’t look good!

Finally, there is the enduring, but entirely false accusation that Coca Cola is responsible for the color of Santa’s suit.  Thankfully, Snopes puts that old chestnut to rest by showing clear evidence of red suits long before the earliest red-suit advertising campaign.

Quantum physics are Dr. Gaute Einevoll’s speciality, and he brings a bold hypothesis to the table:

“We are talking about moving matter, and no one had more knowledge about matter than Albert Einstein. Do I need to point out that the dishevelled physicist reminds many of Santa Claus? Einstein published his special theory of relativity in 1905 and his general theory of relativity in 1916, but after Coca-Cola more or less defined Santa’s ‘look’ in 1930, Einstein didn’t publish that much more. I have wondered if that’s because Einstein became Santa,” speculates Einevoll.

He believes that the reason that Einstein never was able to link together quantum theory and relativity is due to the fact that the famous tussled head was busy in secret helping Santa to become a kind of “Quanta Claus”.  Coincidence? Certainly not!

So how does Santa deal with the exponential population increase in the past few decades, and the increasingly difficult logistics of delivering all those presents?

All together the panel the panel agrees without doubt that Santa Claus not only makes use of advanced physics, but he is also a brilliant organizer.  “Santa lives at the North Pole and there isn’t so much happening aside from the occasional polar explorer. So he can use the whole year for self-improvement,” points out Gaute Einevoll.

Therefore, all children of all ages can relax: The laws of physics assure us that (baring a universal “black swan” event on the quantum level) Christmas will come this year as usual!

Coaxial Components Corp. (Coaxicom)  – To best serve you our holiday schedule is below, but we want you to know that you can still reach us as we will be periodically checking messages and email. Closed: Monday, December 26, 2016 and Monday, January 2, 2017