Warren Buffett Just Made His Biggest Deal Ever

Berkshire Hathaway is buying Precision Castparts, which makes airplane parts and other industrial components, for $32.4 billion. The deal is Berkshire’s largest acquisition ever and the latest of several megamergers this year. Precision also has about $5 billion of outstanding bonds, bringing the total value of the deal to more than $37 billion. At $235 per share, Berkshire is paying a 21% premium over Precision’s closing price of $193.88 at the end of last week. 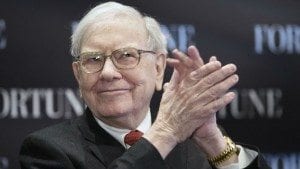 Warren Buffett, Berkshire’s chairman and CEO, had signaled in his widely read annual letter to shareholders (pdf) that he was interested in making a deal this year “in the $5-20 billion range.” Precision Castparts, which is valued at $26.7 billion, would fall well beyond that range.

But its business, often literally involving nuts and bolts, fits the profile of Berkshire’s typical acquisitions. In the letter, Buffett said sought deals that satisfy six criteria, listed here with our commentary:

(1) Large purchases (at least $75 million of pre-tax earnings unless the business will fit into one of our existing units),

(2) Demonstrated consistent earning power (future projections are of no interest to us, nor are “turnaround” situations),

✓ Its profit has topped a billion dollars five years in a row.

(3) Businesses earning good returns on equity while employing little or no debt,

✓ Like many companies, Precision has issued bonds in recent years to take advantage of low interest rates, but they are highly rated and not out of line for its industry.

✓ CEO Mark Donegan has been with Precision for 27 years.

(5) Simple businesses (if there’s lots of technology, we won’t understand it),

✓ It really is understandable: Precision makes nuts, bolts, and other fasteners for the aerospace industry as well as pipes and fittings for the oil-and-gas industry. Nothing too fancy here.

(6) An offering price (we don’t want to waste our time or that of the seller by talking, even preliminarily, about a transaction when price is unknown).

✓ The math is simple: Berkshire’s offer will probably include the typical 20% to 30% premium over Precision’s market value at the close of trading on Friday, August 7, which would put the deal over $30 billion. That’s a lot, but still an attractive price for the company, which traded as much as 40% higher last year.

Berkshire already owns about 3% of Precision. The stock fell further this year after Precision missed its own earnings forecast, blaming weakness in oil and gas, which accounts for about a quarter of the company’s business. One analyst (paywall) said that buying such a nuts-and-bolts firm with a depressed value was a “classic Berkshire move.”